The Association of the Manufacturers of Reinforced Plastic Materials (EMSz) was founded in 1992, as the representative national federation of main hungarian composite manufacturers, developers, educational institutions and suppliers.

The goal of EMSz is to keep up with and exchange of information, to organize educational trainings, to support all kinds of initiatives at European level, assisting further development of GRP industry in Hungary.

EMSz is the host of the traditional “Reinforced Plastics International Balaton Conference”, which became an important composite meeting in Middle East Europe. 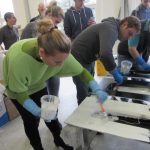